Orla Kiely is undeniably fashion’s sweetheart with her iconic feminine prints that fit seamlessly across collections from homeware to ready-to-wear season after season, always with a hint of her favourite era, the 1960s. The Irish designer began her career designing hats before creating major waves of innovation with the idea of using laminate cloth for handbags in the late 90s, with her distinctive designs leading her to be described as ‘the Queen of Prints’ as time leads on they have seen her work transferred across kitchen and homeware, clothing, accessories, and even cars.

Founded in 1995, the Orla Kiely brand quickly developed an identity for itself as the company embodying colour, pattern and just the right amount of whimsy, with product ranges now including ready-to-wear collections worn by everyone from the Duchess of Cambridge to Kirsten Dunst. Having collaborated on print campaigns and films with like-minded creatives such as Venetia Scott, Yelena Yemchuk and the artist Mercedes Helnwein among others, her designs are now sold in 33 countries worldwide and in 2011 Orla Kiely was awarded an OBE for services to Fashion and Business and the title of Visiting Professor of Textiles at the Royal College of Art. Alongside her highly praised timeless print collections, which undoubtedly show a huge step for female designers in the modern world, an exhibition arrives for Summer 2018 at The Fashion and Textile Museum which, as the name suggests, follows Orla’s work through the framework of her greatest tool – pattern.

I sometimes think that my brain works in repeat. I love the order and regiment of repetition, and how anything and everything can be patterned in this way, as if you are looking at the world through a prism or kaleidoscope.

Presented thematically, Orla Kiely: A Life in Pattern will explore all aspects of Orla’s creative output, from lifestyle and fashion ranges to her iconic use of colour, detail and the geometry of pattern. The exhibition draws on an archive of over 20 years of Orla Kiely’s work with insight into her brand and the methods and concepts behind it, exploring sketches, mood boardsand sample as well as a range of making techniques. It becomes ever-more apparent the beuaity of Orla’s iconic patterns as they can work on any scale, allowing the exhibition to play on distortions of size to create an Alice in Wonderland effect. Dresses are re-imagined to tremendous sizes and displayed alongside tiny dolls in replica outfits, allowing an immersive experience of Orla Kiely’s world of pattern.

Nature is the single most significant inspiration for pattern designers throughout history and Orla is no exception. Each design is developed carefully, by drawing and refining the essential organic elements that are the foundations of her repeating patterns – the natural world rendered more abstract and graphic. Her paired down plant shapes and animal designs reveal an artful simplicity that captures only the essential aspects of the form.

Inspired by patterns of the 1950s and 1960s by designers such as Mary Quant, Shirley Craven and Lucienne Day, Orla’s use of signature patterns, natural motifs, colouration and big bold outlines can be seen within a historical trajectory of artists; William Morris, Voysey, Marimekko. Her simple visual vocabulary brings with it complexity; designs such as Elephant Maze and Little Owl show the designers innate understanding of the negative and positive space and mathematical possibilities lying within the art of repeat pattern.

The exhibition charts the growth and success of Orla Kiely from her first collection of hats at London Fashion Week in 1994, through the advent of the iconic Orla Kiely bag in the mid-nineties to her freelance work for department stores executed from her kitchen table in 1998.

As well as examining the success of the Orla Kiely brand, the exhibition explores the artist’s childhood in Ireland and the way this environment formed her creative outlook, including the influence for her love of colour paying homage to the colours of the Irish countryside, from the greens and greys of vast skies to the browns and mustard yellow of the rolling hills and gorse. Fashion collections are showcased on the mezzanine gallery, with over 30 full outfits displayed on mannequins alongside a wall dedicated to Orla’s iconic handbags.

Having presented her first ready-to-wear collection in 2003 using simple, clean silhouettes that allowed the prints to stand out, her clothes have been worn by a vast supply of household names, including Alexa Chung, Kiera Knightly and the Duchess of Cambridge. From influence to impact, the Orla Kiely range at MyBag includes styles from practical tote bags with classic Orla Kiely floral print to cute mini leather handbags and embossed cross body bags taking heed from the many realms of Orla’s iconic career.

If you love Orla Kiely as much as we do, head down to The Fashion and Textile Museum at 83 Bermondsey Street, London, SE1 3XF from 25th May – 23rd September 2018 to discover the exhibition. 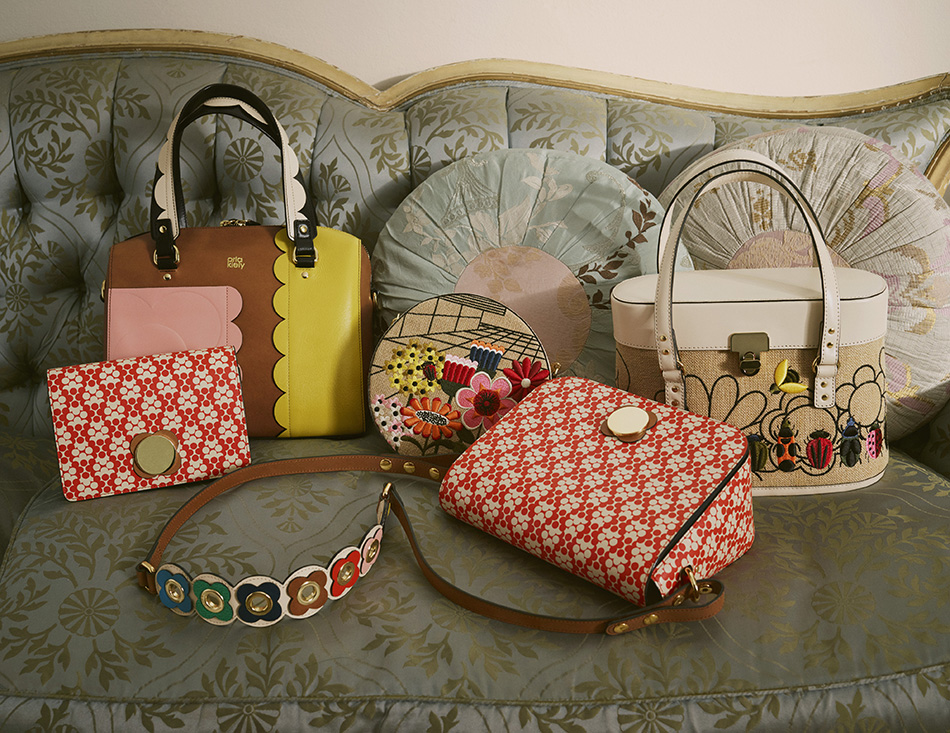 Shop the Orla Kiely handbag and accessories at MyBag >>

Follower of street style trends by the dozen, you'll rarely catch me in anything but trainers. Accessories and outerwear are my calling, and in my eyes there's no such thing as overdoing them.

The Throw In and Go Tote

What to Wear to New York Fashion Week

Should We Wear The Same Outfit Every Day?

Why Ted Baker Is ‘No Ordinary Designer Label’

Karl Lagerfeld | The History of an Icon